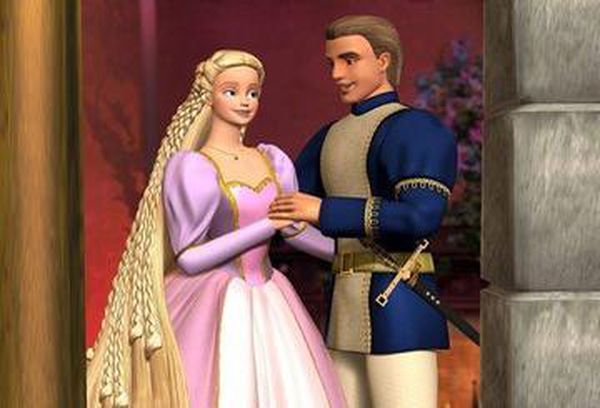 Long, long ago in a time of magic and dragons, there lived a lovely and artistically talented 17-year-old named Rapunzel who had the most beautiful, radiant hair the world had ever seen. But Rapunzel's life was far from wonderful, for she lived as a servant and a prisoner of Gothel, a jealous, scheming witch with many powers. She kept Rapunzel hidden deep in a forbidding forest, guarded by the enormous dragon Hugo and surrounded by an enchanted glass wall. However, in a twist of fate, Rapunzel's discovery of a magic paintbrush leads her on a journey of truth that will unravel a web of deception, bring peace to two feuding kingdoms and ultimately lead her to love with the handsome Prince Stefan. She succeeds with the help of her friend Penelope, the least intimidating of dragons. Barbie as Rapunzel shows girls that love and imagination can change the world. Academy Award-winning actress Anjelica Huston brings an icy chill to the part of Gothel. Cree Summer voices the exuberant Penelope and Kelly Sheridan returns as Barbie.